The Consumer Financial Literacy Survey provides a fresh look at the American consumer’s level of knowledge as it relates to financial literacy, as well as trends associated with personal finance behavior as it relates to retirement, savings, credit card debt, student loan debt and more.

The 2017 Consumer Financial Literacy Survey was conducted online within the United States by Harris Poll on behalf of the NFCC and is sponsored by BECU.

Reversing a trend that has been consistent since 2009, more U.S. adults are spending less than they were last year (26% vs. 23% in 2016). As more households carry costly credit card debt from month to month, spending could become a greater challenge as Americans try to pay off balances while working against a rising tide of interest and fees.

A little over half of adults (54%) say they are saving the same as last year, slightly down by 4 percentage points from 2016. Those who say they are saving “more” remains unchanged since 2016 (26%). The proportion that has non-retirement savings has decreased slightly in the past year (68% vs. 69% in 2016).

Additionally, more than 1 in 4 U.S. adults (27%) do not save any portion of their household’s annual income for retirement, which holds steady compared to 2016 (26%) – continuing the trend of a large percentage of adults not funding this important life event. When asked what areas of personal finance are most worrisome, retiring without having enough money set aside was the top response, up significantly more than the previous two years (18% vs. 15% in both 2016 and 2015). 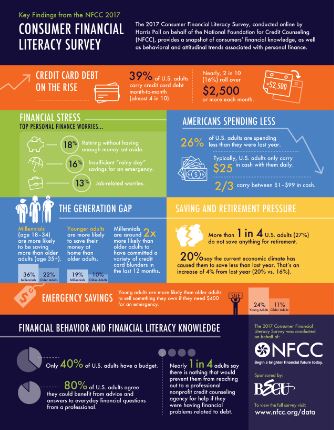